While the layout is located on the second story, the Dispatcher's desk is downstairs in the shop area.

While still under construction, the Dispatcher has a "stop order" board that displays stop signals at 12 different station on the layout.  Each of these stations also has a phone connected to the Dispatcher so they call call in for train orders etc.

The Dispatcher will also be able to control the ball signals at Farmington, Strong and Phillips to control right of way into these towns.

The fast clock will be under the Dispatcher's control using a phone based app.

Each of these 12 stations has a station desk.  The plan is to build a writing surface that can pull in and out for crew do handle paperwork. 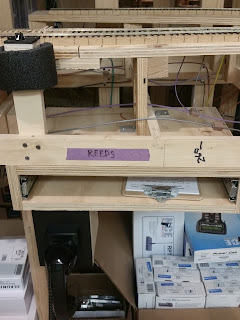 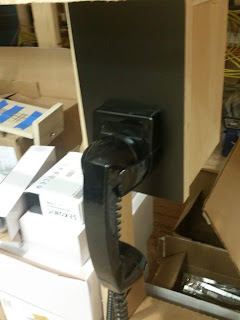 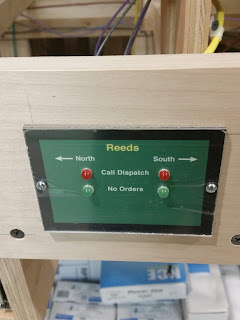 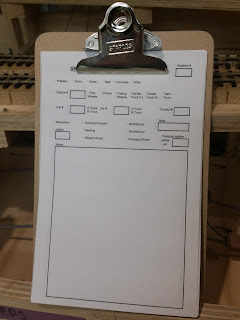 For roadbed I wanted a method that would produce flowing curves, be easy/quick to construct and install.  On an earlier layout I had used thin wall 1/2" diameter PVC sprinkler pipe as you might use a spline roadbed.  Since each pipe section comes in ten foot lengths it proved both quick to install and inexpensive.

However, my first approach used only one pipe topped by 2" of blue foam.  I routed out a groove down the middle of the foam that would nestle over the pipe.  The foam was attached to the pipe using construction adhesive.  This approach worked okay for straight track, but for curves I had to cut the rigid foam into short sections and piece them around the curve. 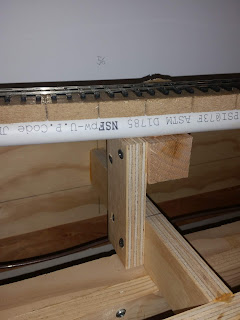 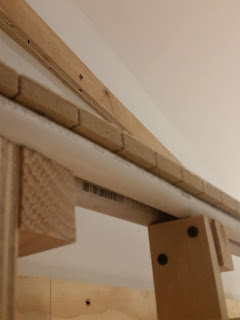 For this layout, I wanted all the advantages of the PVC pipe approach without the hassles of "foaming" the curves.  So my version 2 approach was to use two parallel pipes and then glued homasote on top.  By using the pair of pipes they provided about a 2" wide surface to support the homasote.  This approach worked fine with a couple of cautions...

To install the pipes I built "T" risers from 3'4" plywood for a riser and short sections of 2x2 for cross pieces.  I had previously marked the track center line on the top of the benchwork.  I screwed these risers to the benchwork along the marked center lines so that the top of the T risers were at the correct elevations.  Given the benchwork design, these support risers are spaced 12 to 16" apart.

I remarked the track center lines on the top of the 2x2 portion of the risers.  I put four 1/4" nuts over a dry wall screw to provide a "fatter" post, then screwed this combination to the 2x2 on the centerline.  These "fat" screws provided a row of posts for the PVC pipes, one on each side, to nestle against.  The posts kept the pipes in alignment.  I clamped the pipes in place and then screwed each pipe to the 2x2 cross piece to hold the pipes in place.
Posted by SRRL Fan at 9:00 AM No comments:

Lighting the layout has been a fun challenge.  With the help of a lighting expert,  Scott,  the layout has both warm and cool programmable LED lights.   Scott selected this bi color approach to give very realistic light coloring.  And the 5 meter light strings produce more illumination than needed for the layout.  They can easily produce more than 1,000 LUX readings at track level.

Night time is very realistically represented at very low levels with just the cool, blue LEDs powered.  Settings can take the light levels so low that trees on the layout just look like dark shapes, or a bit brighter to represent moon light.  Slowly adding the warm, yellow light brings sunrise to the layout or at the end of the day, sunset.  During the day, both warm and cool LEDs are powered to provide the balanced realistic sunlight.

Another friend, Kevin, is developing a phone based app that controls all the layouts lights.  One control will govern sunrise and sunset times.  At the start of operating sessions we'll select which "month" we're going to operate.  I'm planning on syncing our operating session months to the current, real month.   So in January Kevin's app will select the lighting controls for sunrise/sunset times in Phillips in January.  Each month will have different times, so the daytime duration on the layout will automatically match the operating month.

Also, the Dispatcher will be able to choose the weather for each session.  He could choose rainy or cloudy conditions where the light levels are down all day, or choose a clear day where there is bright sunlight.  He'll have the choice of several intermediate levels too. 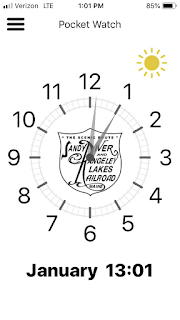 We're testing an approach that puts a "pocket watch" on crew members cell phones.  Rather than having fast clock displays around the room, crew members can just check their phones to see what time it is on the layout based on the fast clock.   When the Dispatcher pauses the system, all the pocket watches will pause too. 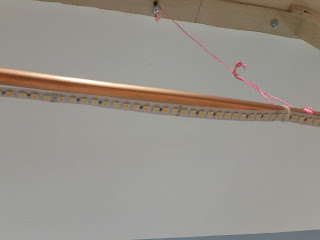 In order to curve the lights to follow the layout path, and to make sure the materials supporting the lights were able to deal with heat, I used copper piping. 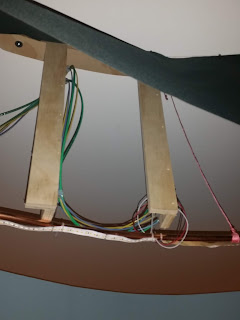 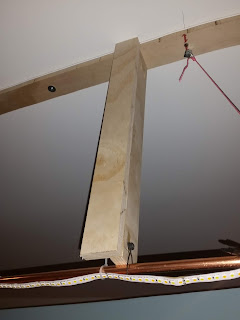 The pipe was bent to match the flow of the layout.  It is has been temporarily rigged in place for now, but the pipe will be fixed to support drops.  And the LED strips will be permanently attached to the copper pipe too.


Scott also came up with another advantage to the copper pipe system, the LED light string can be rotated around the pipe to focus directly onto the part of the scene I want to highlight.
Posted by SRRL Fan at 9:00 AM No comments:

When designing the room for the layout, lighting had to be considered.  All along the aisles of the layout, there are dimable LED lights installed in the ceiling. 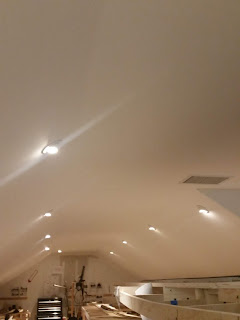 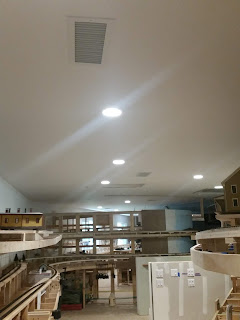 These allow for adequate lighting when working on the layout, as well as to provide additional light to light the asiles.  They can be adjusted as needed and turned off completely when the layout lighting is on.
Posted by SRRL Fan at 9:00 AM No comments:

This video features engine #24 running the entire 364 feet of upper level of the layout.  The footage was captured using a Go Pro sitting on top of the cab.

This video shows #24 with freight train backing out of the siding at Strong and headed up to Bigelow.

The elevator transfers trains the 24" between the lower and upper levels and will hold up to a 12 car train.

The track is protected by several photo cells that will keep the elevator from moving if any rolling stock is not clear of the transition zone.

SRRL Fan
Hi, my name is Ron and I’ve been interested in Maine Two Footers since the early 70’s and the Sandy River and Rangeley Lakes railroad in particular. For me, as with many, I fell in love with the two footers after reading Moody’s book. I had been modeling Colorado in Hon3, until one day when my local hobby shop had a Custom Brass #6 and a caboose #556 for sale. Bought the On2 equipment and sold the Hon3 and been doing SR&RL ever since.